The official figures are relatively low

Looking at the official data on the number of infected children, they seem to play a rather minor role in the infection process: In the last two weeks (week 44/45) a total of 34,500 children and adolescents up to the age of 19 were reported as infected. That would be about 0.45% of all children and adolescents at this age. What is striking, however, is the strong increase in the last few weeks; just over a month ago this figure was less than 0.1% (see figure). 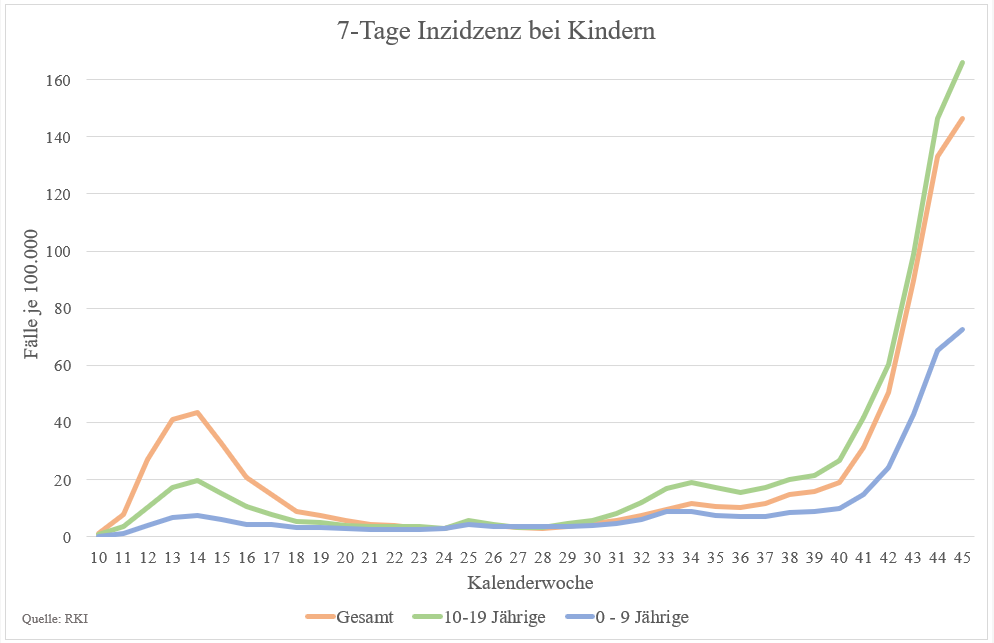 Some studies say that few children get infected

Various studies have also found that comparatively few children are infected. Important here is the Saxon Corona School Study, which tested around 2,500 pupils and teachers in September and after the autumn holidays (2,439 smears and 2,197 blood tests). This study found 0.4% infected pupils and 1% infected teachers. The Ministry of Education disseminates this study under the heading "Still low infection rate in Saxony's schools". In figures as well as proportions this seems clear at first glance. On the second, however, there are a few question marks. As far as can be seen, these are individual tests in which 400 per 100,000 reference persons were infected among the pupils and 1,000 per 100,000 teachers.

Another study from Hessen comes to similar results. It examined 800 day-care centre children over several weeks without discovering an infected child. Only two educators were infected. This also raises the question of how to assess the results. For example, an incidence of 40 children per 100,000 over 4 weeks would mean that among 1,000 children, on average only 0.4, i.e. less than 1 child, would be infected. In August and September, the incidence was 30 and 40 per 100,000 zero to 9-year-old children respectively. The question arises whether the number of children examined is really sufficient to make reliable statements. At least 2,500 children would have to be examined in order to have a high probability of having a single infected child in the group. In addition, there are factors such as the large regional differences in the incidence of infection and different risk precautions, i.e. protective measures, in the areas investigated. Sandra Ciesek, the lead author of the study, also says that the study should be repeated if there is a higher incidence of infection than in late summer.

In general, only low infection rates in children are reported, which is in contradiction to antibody studies by the German Research Center for Health and Environment. The study proves that in the period January and June 2020, antibodies were detected in 0.87% of the blood samples of 0 to 18-year-olds in 12,000 cases. This value is 6 times higher than the value of children reported infected with Covid-19 in the region. Age and sex did not seem to make any significant difference, although the proportion was slightly higher among 7 to 18-year-olds than among 0 to 6-year-olds, here is the source. So many more children were infected than reported. Another study confirmed that the level of antibodies in the blood of adults was four times higher than publicly reported.

If these results are translated into incidence values, then it becomes clear that according to this study the probability of infection among 10- to 19-year-old adolescents is even significantly higher than the average of all age groups - as the figure below shows. Although it remains below the average development in children, it is also clearly approaching here. 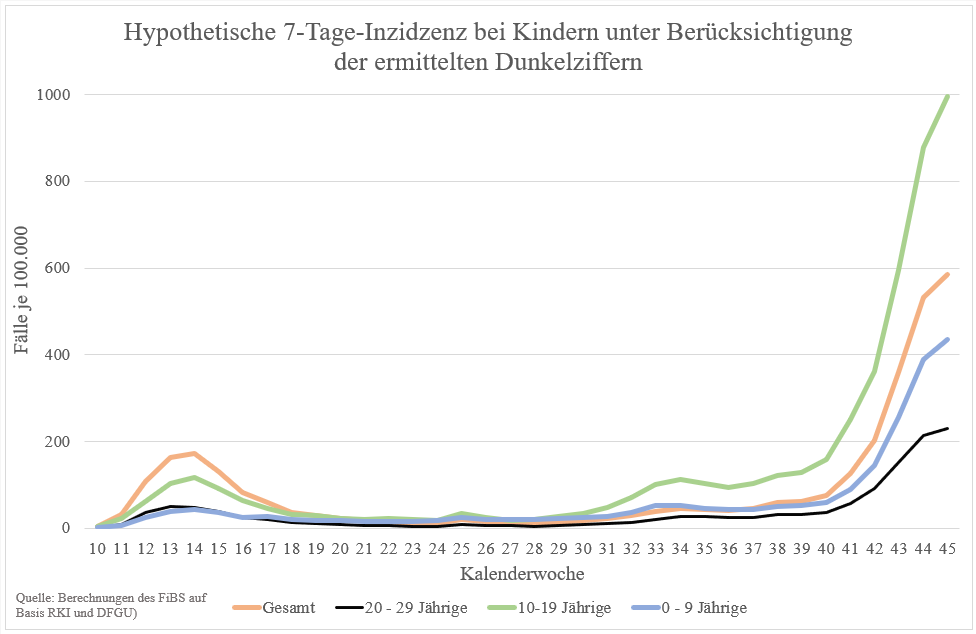 From these findings it could be concluded that the probability of infection in children is as high as in adults: Virologist Christian Drosten had already determined this in spring on the basis of one of his Studies. The graph above would even indicate that teenagers are more infectious than the average population.

What does this mean for the entire population?

If this assessment were correct, the question would still remain as to how likely it is that a child will infect other people, be they children or adults, in order to trigger possible reactions to the results. Our exaggerated Survey of whether schools should remain open or be closed has shown that parents have very different preferences.

And what does that mean in summary?

These results can be summarised as follows: Different research approaches lead to very different results, a secure basis is still not available and the curve of infections has increased significantly in recent weeks, both in adults and in both larger and smaller children. Even the smaller children are usually only a few weeks behind the overall development - the (apparently) lower number of infections is possibly due to the fact that they show symptoms less frequently.

An overview with a summary of further studies can be found here.