What is the current situation?

After the number of confirmed infections with COVID 19 has decreased significantly in the last two months, the values have been rising slightly again for more than two weeks. While the 7-day incidence on Friday two weeks ago was 57 per 100,000 inhabitants on a national average, it is now around 65.

This increase is also reflected in the federal states, even if there are still considerable fluctuations: currently only Rhineland-Palatinate is below the mark of 50 new infections per 100,000 in the last seven days. In Baden-Württemberg and Lower Saxony, the values are still below 60. In contrast, Thuringia now has a value of almost 130 again, and in Saxony-Anhalt it was 86. The figure shows how the values in the states have developed in recent times - they have increased almost everywhere. In addition, the British mutation is spreading rapidly, as it is clearly more contagious than the previous variants. 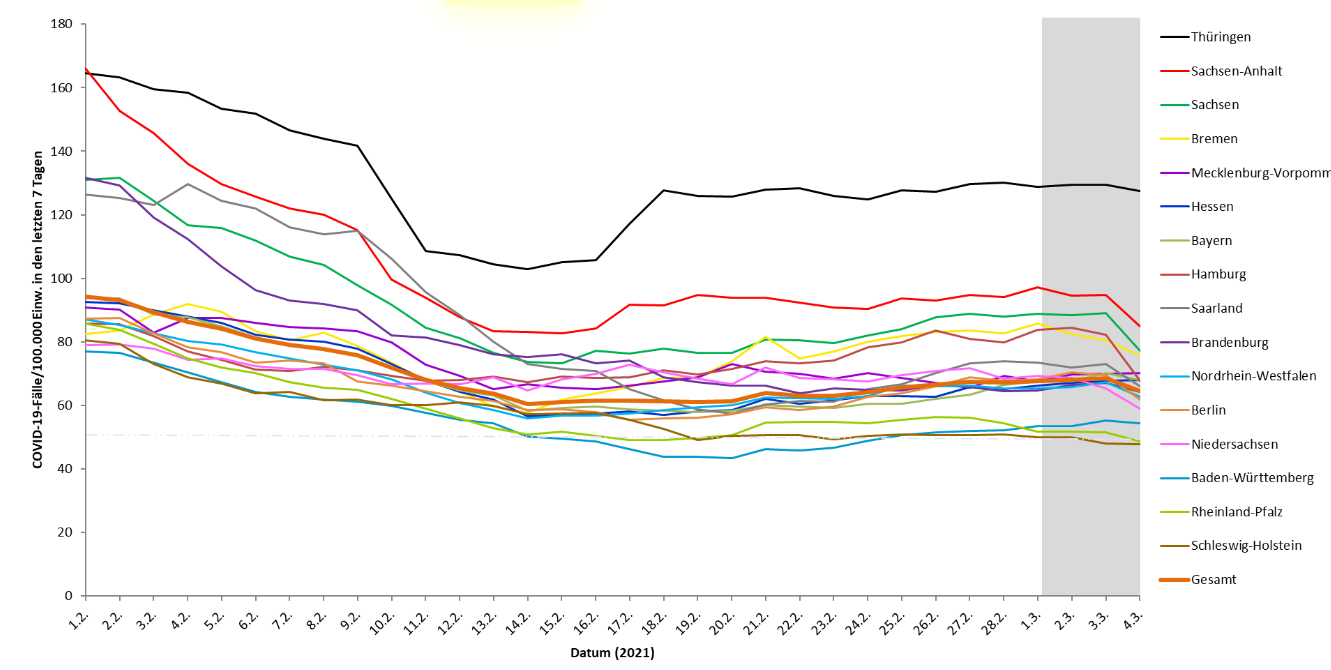 What developments can be expected in the coming days and weeks?

The rising values can be observed despite the lockdown rules still in place. Therefore, a stronger increase can be expected if the relaxations decided on Wednesday are realized in the coming weeks. At the same time, it can be assumed that the British mutation will become increasingly important. The development of the past weeks has proceeded exactly as predicted by the forecasts.

It is therefore extremely important that we all contribute to preventing an increased rise in the number of infections as far as possible through cautious behaviour. At the same time, however, it is also important to keep the psychological burden as low as possible or not to increase it any further.

Are schools drivers of the pandemic?

A Robert Koch Institute study last week noted, "In summary, the data presented and the studies cited above suggest that students tend not to play a major role as "drivers," but that incidence is closely related to incidence in the general population." In the sentences that follow, reference is made to the limited dispersion or spread outside the immediate group of students (Study of the Robert Koch Institute). That is, on average, schoolchildren have about the same incidence as the population as a whole. It should be noted that the average infection of the population is strongly influenced by the high risk of infection of older people. If this group were removed, the result would change. I am therefore not convinced by the RKI's conclusion.

Does the British mutation increase the risk of infection for children and young people?

The British mutation is clearly more contagious than the previous variants, this also applies to children and adolescents. Possibly it is even clearly more infectious in smaller children, also the course seems to be less favourable. I.e. it often lasts longer and/or is more often associated with a more severe course.

The first countries have already started to relax the emergency childcare regulations again on 22 February. In the meantime, about half of the children are back in the day-care centres. Most countries are now planning a complete return to normal operations, even if some are still calling it "operation under pandemic conditions".

See CWDI for the regulations in the individual countries.

The first countries have already started to open schools again more for face-to-face teaching on 22 February. As a rule, these were the lower classes in primary schools and the pupils in the final classes. In most cases, this involves alternating teaching with smaller classes - the concrete implementation (e.g. daily or weekly alternation) is usually up to the schools.

In the meantime, the Ministers of Education and Cultural Affairs have decided that all classes will gradually return to the schools in the course of the next few weeks until the end of March. For the time being, the alternating classes will remain in place.

Some of the Länder have continued to suspend compulsory attendance in class. This means that children do not have to go to school, they can also stay at home. In many cases, however, this could mean that they get nothing or little of the lessons, as teachers cannot be in front of the class and engaged in distance learning at the same time. Even though this is often expected.

See CWDI for the regulations in the individual countries.

It was also decided on Wednesday that people can meet more people again. However, the arrangements depend on the infection situation on the ground:

Then up to five people from two households can meet. Children up to 14 years are not counted. Their limit is 20 children in a group, if this sport takes place outside.

May up to 10 people play sports together outside, as long as it is a sport where there is no physical contact. That means: running together, playing tennis is allowed - football, basketball etc. not (with so many people at the same time). With children, as I understand it, there are no restrictions, i.e. they would also have to be allowed to play ball in larger groups, for example.

In this case, the "old" rules apply again. That means: meeting with a maximum of one other person from another household, no sports in groups, no matter if jogging or playing ball etc..

According to my understanding in this case also Kitas and schools would have to go then actually again into the Lockdown, however there are to my knowledge in addition no agreements, also not of the conference of education ministers.

Part 2 will be released on March 7 with options for parents to take action on schools during pandemic season.