What is the current situation?

The national average 7-day incidence on 1 April is almost 135 new infections per 100,000 inhabitants in the last 7 days, which is 25 - or almost 20 percent - more than ten days ago. On the positive side, however, it should be noted that this figure is well below the levels of over 200, and in some cases even over 300, which were feared at times by the Robert Koch Institute. Also, the incidence values are currently rising relatively constantly by about 20% per week, which is slightly less than two weeks ago.

This increase, which can be observed in spite of everything, is also reflected in the federal states, where there are still considerable fluctuations: currently only Schleswig-Holstein (75 new infections per 100,000), Saarland (86) and Mecklenburg-Western Pomerania with 97 new infections per 100,000 inhabitants in the last seven days are below the mark of 100, at which the so-called emergency brake was actually supposed to take effect. This emergency brake had been decided in the Minister Presidents' Conference of 3 March and all opening measures were to be reversed. Currently, however, almost no federal state is adhering to this emergency brake.

Thuringia has by far the highest incidence value with over 250, followed by Saxony with 190 and Saxony-Anhalt with 162. In the latter two states, however, the numbers already seem to be somewhat lower than last week.

The so-called British mutation is now responsible for almost all infections. On the one hand, it is significantly more contagious than the previous variants, and on the other hand, it is also significantly more dangerous, especially for younger people, children and adolescents. The course of the disease is on average longer and more severe.

As few contacts as possible! Otherwise the incidence of infection will continue to rise

If we do not succeed in stopping the dynamic infection process through consistent contact restrictions, we can expect further increases in the coming weeks. We all have the opportunity to limit our contacts with other people as far as possible. If you want to protect yourself and others, you should avoid contact with other people as much as possible, or at least limit it to a very small core. For this we do not need any governmental guidelines. Instead, we are all asked - in the interest of all of us.

Specifically, one should not meet with several people indoors, i.e. especially the apartment. However, it should also be noted that the risk of infection is greatest within a family. For families, it is of course not possible not to meet in the home. Nevertheless, in order to keep the risk for all family members as low as possible, it is advisable to meet with friends outside and in small groups. The risk of infection is much lower outside. This is especially true if the distance and hygiene rules are observed.

Many places also have a so-called curfew, which applies for the night, usually between 9 or 10 pm and 5 or 6 am. The concrete regulations vary and can be read on our page Corona-was-darf-ich.de. (Corona-what-do-you-call-it.com).

If it is not possible to reduce the risk of infection significantly and as quickly as possible by avoiding contact, then a further sharp increase in the number of infections can be expected in the coming weeks. If the current value of +20 percent compared to the previous week is maintained, the 7-day value at the end of the coming week would be around 160.

The consequence of further rising values is inevitably that ever stricter regulations are enacted. This means that there are ever more stringent restrictions, right up to the complete lockdown that we had over Christmas.

Increased risk of infection for children and adolescents?

In recent weeks, the 7-day incidence of children and adolescents has risen very sharply. Taking the "bare" figures, the "heatmap" below shows strong increases especially in the younger age groups. The darker the red, the stronger the increase or the higher the incidence values. For example, the 7-day value for 0- to 4-year-olds is currently 125, and for the other cohorts of children and adolescents, some are between 175 and 185. Only the 10- to 14-year-olds are below that, at 152, but still above the general average value of 138 (that's the value from the day before yesterday (3/30/2021); above was the value from today (4/1/2021) - hence the differences). 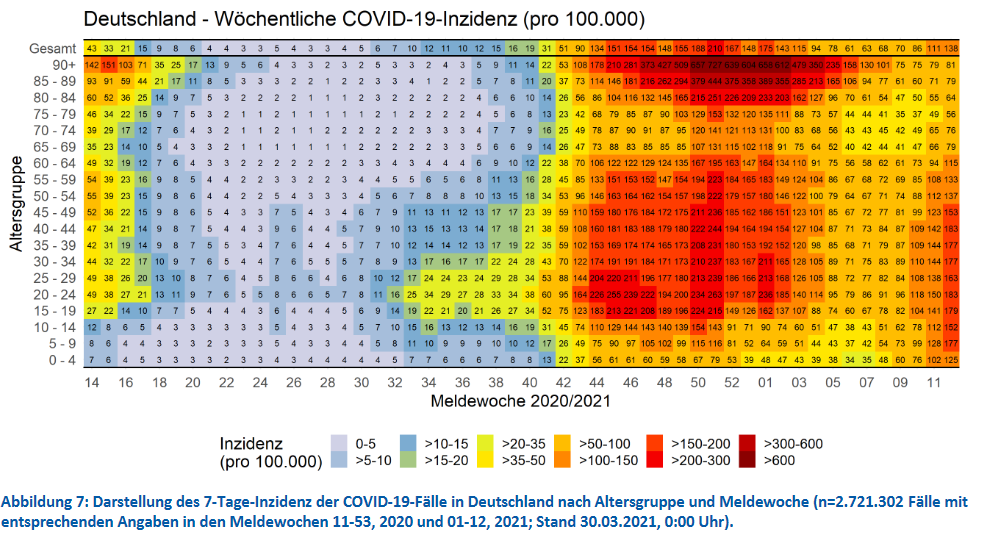 Especially for the 0 to 9 year olds, the values are above all previous values, and significantly so.

There is some discussion about how these values should be assessed: Among others, the German Society for Pediatrics and Adolescent Medicine (DGKJ) and the Federal Association of Pediatricians and Adolescents (BVKJ) point out that these high values are particularly due to the significantly higher number of tests. Since, in addition, the proportion of positive tests has decreased, they conclude that the increase is not disproportionate. Instead, it is more likely that the number of unreported cases has decreased (see here)

I am only partially convinced by this conclusion: Even if part of the increase is due to higher testing numbers and the increase is not disproportionate, the fact remains that current incidence levels are significantly higher than ever before. Furthermore, it is evident that the so-called R-value, which indicates the rate of infection, continues to be well above or 1.3, which means that 100 infected children infect over 120 or over 130 other children. This means a very high and dynamic infection rate.

In addition, the British mutation is overall significantly more contagious than the previous variants, this also - and possibly especially - applies to children and adolescents. The course of the disease also seems to be less favourable. I.e. it often lasts longer and/or is more often associated with a more severe course.

This means that the risk for children and adolescents to fall ill has increased. It is also true that then often to fall ill more seriously than before.